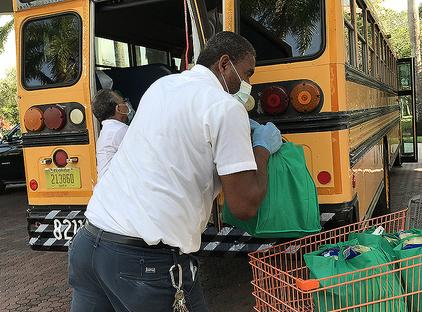 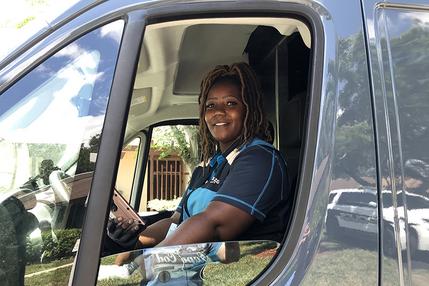 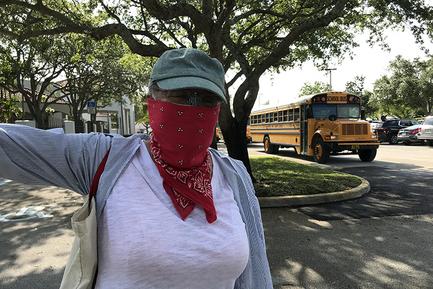 A Prime essential worker making deliveries at East Lake Condos mid afternoon. Many essential workers are African Americans trying to make a living and take care of their families during Covid-19.

I’d processed the idea in 1974 when I lived in Los Angeles, California and worked briefly for Amtrak as a Reservations Agent. It was the first time I’d heard of plans for the upcoming Autotrain and its proposed daily roundtrips from Virginia to Florida.

2020 would be a new year. I ordered my train tickets in late November for the Autotrain to travel south on January 4th. I had retired in August 2016 and this was the year to put my winter plans into action. I taught fall semesters to save up my coffers for the winter hiatus. I would spend the winter in South Florida snow birding as the secretaries on my job used to delight in sharing. It was supposed to be the best of all worlds. Live in the New York area for three seasons and during the winter make your exit to South Florida. After educational stints in Rochester and a low residency master’s program in Vermont, I was ready to experience a winter in Florida.

With plans in place, I drove to Virginia a day early and stayed in a hotel. While checking in at the reservations desk, I was informed that the train departure for the next afternoon would be late. A tax accountant colleague, from RIT days literally lived five minutes away from the hotel and picked me up for dinner. It was a relaxing evening at a decorative restaurant after a very long drive to Virginia. We reminisced about old times.

Finally, in my coach window seat surrounded by seniors, fatigue set in for the overnight uncomfortable coach ride. The afternoon train was four hours late departing. I had a relaxing fish dinner accompanied by a glass of wine in the train’s dining car seated at a table for four.
By Saturday mid afternoon, we finally arrived into Sanford, I recognized my ‘baby car’ being delivered in one piece. When the skies opened up on the journey from Sanford, Fl., I spent the night in Fort Pierce. Seemed like it was already the rainy season. Turns out Harlem Renaissance writer, Zora Neale Hurston spent time in Fort Pierce. I was happy to hit the highway the first thing in the morning. With a cup of Java, I greeted I-95 South as the sun was skirting across the horizon. Upon my arrival to Fort Lauderdale, my niece and my sister greeted me. I spent a little precious time with my sister whose departure date north was in mid-January.

With time on my hands, I went to midday movies, read Ta-nehisi Coates "Water Dancer" for my book club, edited my personal narrative, exercised at two 24 Hour Fitness gyms, visited an old school museum in Davie, had fun lunches all while my niece operated her evening dance Hip-Hop dance studio. As things evolved, I was introduced to the Senior Citizens Center where I took Tuesday and Thursday night photo classes to refresh my ideas for teaching fall classes in Rockland. I also took Friday afternoon Zumba classes. I even learned to use a new photo editing program called ON1 Photo Raw. It was great to talk photography with interested hobbyists. The experience of living in South Florida brought my five years of junior and high school Spanish to the forefront. Through the Senior Center I met the President of the Photo Club. We discussed presenting my Retrospective Photography Series to club members. We did a technical run through in February. Everything worked fine so we were set for March 24th presentation.Little did we know that by then self-isolation and self-distancing would be in full effect.

On a beautiful Sunday morning my niece fulfilled a promise to drive me to visit Wynwood, an arts community near downtown Miami. Parking was at a premium and while walking throughout Wynwood, I made a few wonderful images.

I discovered Wynwood was a gentrified part of Miami with the African American community of Overtown on the other side of the four-lane highway. In other words, the highway went right through Overtown. Famed Boxer Muhammad Ali had apparently preferred to stay in Overtown during his fights in Miami. Excited by that historical fact, I decided I would have to visit Overtown one day and document the community.

The first week of March, I ventured across the state to Saint Petersburg to visit a girlfriend who had resettled there from Rockland County. Traveling across Florida’s Everglades was most interesting yet I really wasn’t in the mood to meet alligators. “St. Pete” as the locals call it was a lovely community with beautiful art galleries, restaurants, museums, including
The Dali. It had an African American Heritage Trail which included the Carter G. Woodson African American Museum. Considered The “Heart and Soul” of St. Petersburg, the Museum offered programming for Women’s History Month highlighting African-American women Suffragets. As I left St. Pete, I picked up a Tampa newspaper from a 7-Eleven and discovered that Tampa had reported its’ first case of the Corona Virus. There was a shooting on the highway and all traffic heading east was diverted onto local roads. Two people were shot at 4:00am from a road raged driver. The violence was unimaginable.

Things went rapidly downhill from there.

Covid cases started to rapidly increase in South Florida and I discovered that both Fort Lauderdale and Miami ports were where ocean liner cruises were returning from the favored destination of Italy. My mind queried “Isn’t that the European country where so many Covid-19 cases were reported and elderly people were dying?” I immediately put two and two together. Taking precautions on March 1, I ordered some heavy duty N-95 face masks. I was too late! Turns out the masks were coming from China and I never received them. An avid listener to NPR, I heard a breaking news broadcast that Miami Mayor Suarez announced he had the Covid. He had just been in Mar-a-Lago with the President and representatives from Washington DC including the two Brazilian officials who eventually tested positive for Covid. Then Tom Hanks revealed that he and his wife who were in Australia made headlines with the Covid.
It was officially Spring Break, the hotels and beaches were still open and all of the college kids partied shoulder to shoulder in South Beach. Gov. DeSentis closed the beaches the next day and the revelers moved through the marinas onto yachts to party. The marinas were then closed. Some of the revelers caught the Covid and apologized to the nation and their families for their insensitivity. Then we were all ordered to self-isolate. Across the Nation, the Covid numbers kept rising. There was no vaccine.
Schools, restaurants, businesses were closing. Many students were not prepared to work electronically from home. Like healthcare, there is a disconnect with computer equipment in some homes. Some families simply can’t afford either of them.
Donations were made to provide students with Internet, I-Pads and computers.
Nationally, Dr. Fauci and health officials admonished us to wash our hands for 20 seconds and not to touch our faces. No one knew for sure exactly how it spread. Plans were being made to work from home if possible. Only essential workers needed to be on the streets. Necessities like toilet paper, masks, alcohol, hand sanitizer, disinfecting wipes and supplies were flying off the shelves. The news was broadcasting public fights over toilet paper and these stories were miraculously making headlines. I literally bought the last 12 rolls of toilet paper from a Spanish community supermarket. Senior hours were created for shoppers so we wouldn’t have to interact with the general public. Yet, seniors weren’t the only vulnerable population…everyone it seemed was coming down with Covid-19 especially people with prior health issues and now younger children. There wasn’t sufficient PPE for health workers and doctors. Supplies were running critically low. Not enough testing. People across the nation and in Rockland started to make masks. It was truly remarkable to see the love in the mask making projects. My niece cleverly had three masks made to advertise her business.
Our communities started broadcasting everything on Zoom.
To communicate with the world, we downloaded the free Zoom program onto our computers and scurried to learn how it worked. With speakers, tv monitors, exercise flooring, cables, and audio boards, I helped my niece move her Hip-Hop studio home. She was preparing for her annual dance recital and it was essential for her students to have dance classes and to keep her eleven-year old business afloat. Parents needed a break.
I kept hearing of deaths in Rockland. People who I had known for years were suddenly gone. Artists and musicians were dying left and right. The Covid virus hit everyone anywhere. There was no way to say goodbye, except a note of condolence on e-mail or Facebook.
With massive protests Covid-19 will spike again and that is another story. This is the new normal.

Essential workers like school bus drivers picking up food from the local Senior Center to deliver to senior citizens during Covid-19.

Educator Ms. Vee out for a walk at Senior Center. To occupy her time, she also works on a lovely garden at her senior home and grows various herbs and flowers. Due to health issues, she’s not sure of where she’ll be placed when she returns to teaching in September. Buses in the background will deliver donated food to seniors in her neighborhood.
© Collette Fournier Photography 2020